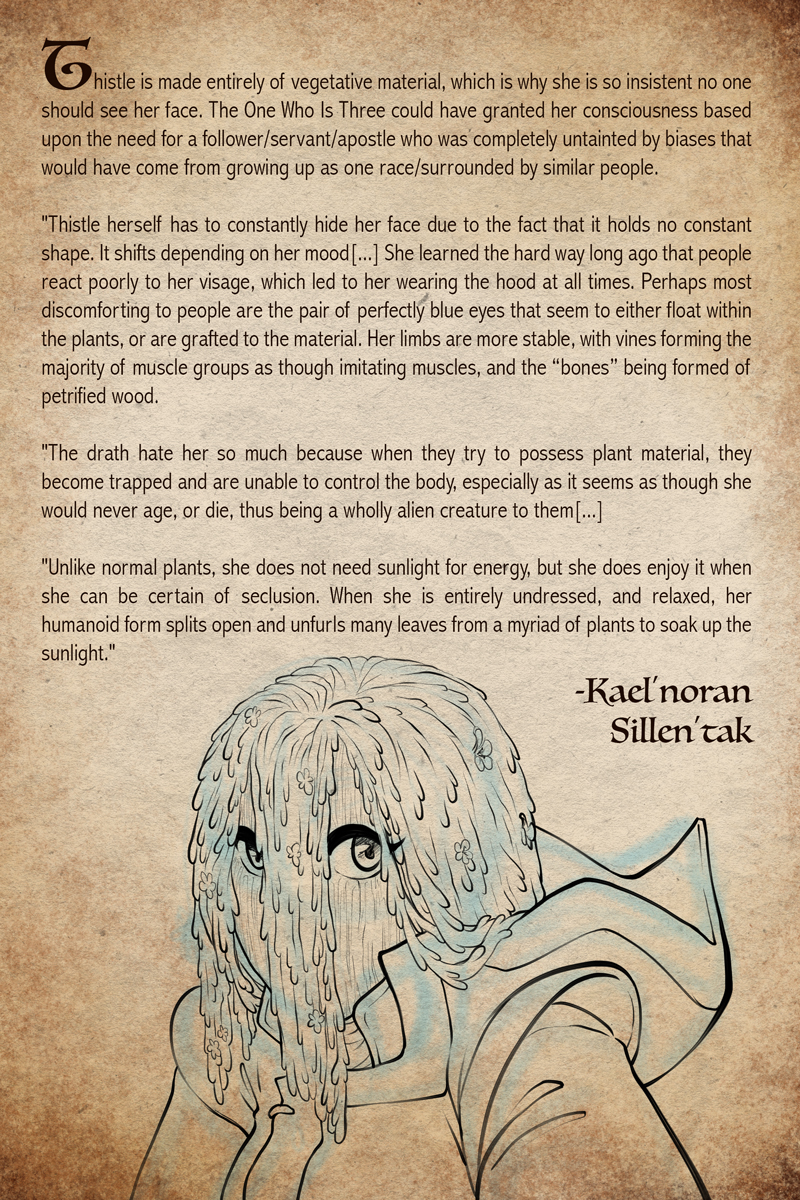 "One of my more wishful thinking episodes was Thistle was made entirely of vegetative material, which is why she was so insistent no one should see her face. This would explain her constant choice of plants for names, and also why she was able to easily identify seeds from a glance. The One who is Three could have granted her consciousness based upon the need for a follower/servant/apostle who was completely untainted by biases that would have come from growing up as one race/surrounded by similar people.

"Thistle herself has to constantly hide her face due to the fact that it holds no constant shape. It shifts depending on her mood, from gently writhing vines when she’s calm, to hard carved oak when she’s angry, and when she’s happy there just seems to be a veil made of willow leaves. She learned the hard way long ago that people react poorly to her visage, which led to her wearing the hood at all times. Perhaps most discomforting to people are the pair of perfectly blue eyes that seem to either float within the plants, or are grafted to the material, sometimes even with small roots seeming to creep through the sclera, as if replacing blood vessels. Her limbs are more stable, with vines forming the majority of muscle groups as though imitating muscles, and the “bones” being formed of what she can only imagine is petrified wood. Having never broken one, she has had no real intentions of finding out for certain. However, her nails appear to be such, and are always in the shape of claws, necessitating the thick gloves to prevent anyone from feeling such.

"The Drath hate her so much because when they try to possess plant material, they become trapped, but unable to control the host. This is only exacerbated by her divine connections, but their hatred truly stems from a body that they can’t control being able to walk freely, especially as it seems as though she would never age, or die, thus being a wholly alien creature to them. The Drath echo remaining within her constantly calls her on her insecurities, but also is sure to remind her of her lack of “humanity.” It enjoys referring to her as a thing, a potted plant, and other dehumanizing terms, which only adds on to her doubts about the people around her abandoning her if it should ever get out.

"When the One who is Three animated her, Thistle was made to experience hunger/tiredness so that she could fit into typical society; she is, however, unsure where the waste goes, as she has never needed to relieve herself. However, she has sometimes noticed vapors rise from her in heat, which smell more of food than just plant material. She has become very selective in her diet due to this.

"Unlike normal plants, she does not need sunlight for energy, but she does enjoy it when she can be certain of seclusion. When she is entirely undressed, and relaxed, her humanoid form splits open and unfurls many leaves from a myriad of plants to soak up the sunlight. Whether this is representative of her visceral cavities is a mystery, as she has often felt solidity when trying to feel her abdomen, and does possess a “skeleton” similar to humanoids. She does, however, possess a greater need for liquid than most people, and with severe dehydration her movements become very stiff.

"I realized this would be highly unlikely (who could draw this with consistency, and who would be mad enough to try?), but I always enjoy the bizarre, and so tend to have hopeful flights of fancy."
- Kael'noran Sillen'tak

Kael'noran unfortunately has no URL to share with us, but man, what beautiful imagery this elicits, and it's so well thought out - almost every detail is accounted for. Sign me up for Dryad!Thistle please.

Remember: DAUGHTER OF THE LILIES RETURNS ON SEPTEMBER 25th