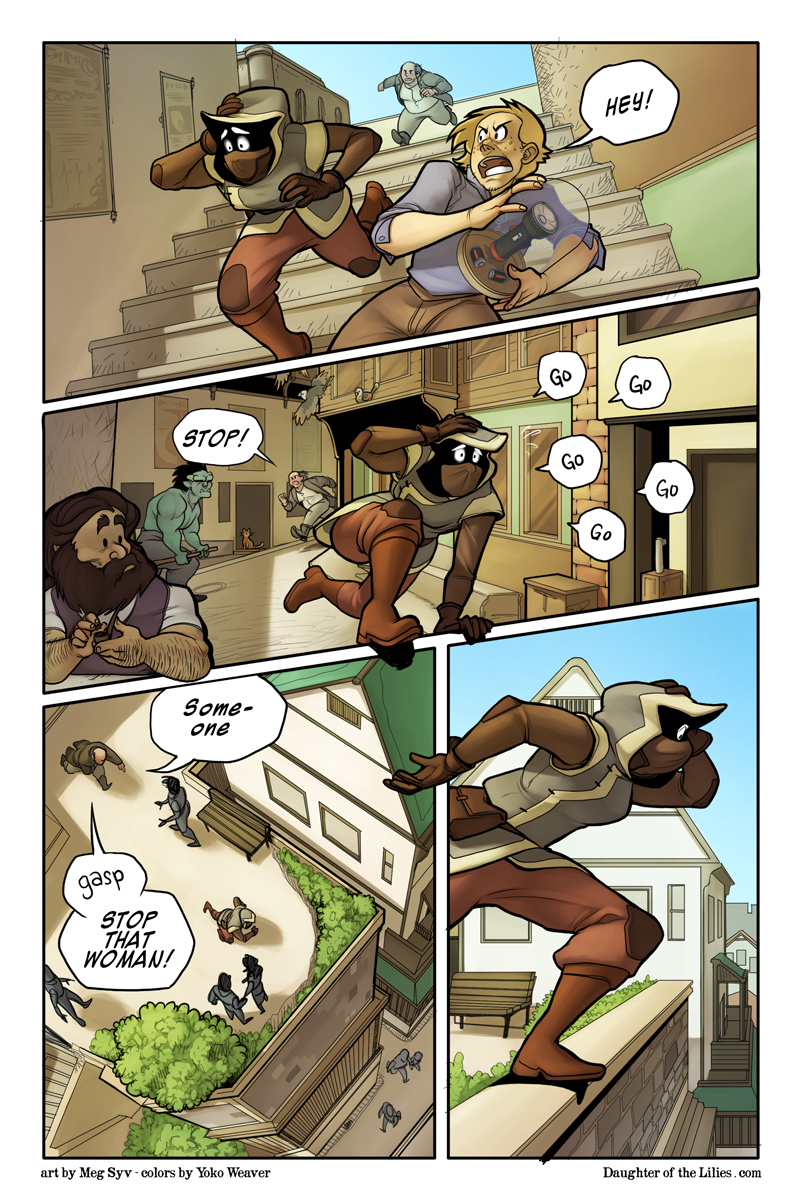 Aw dude I am so glad to be back. Honeymoons and weddings and cross country trips are great and everything, but dang, two weeks is too long to be away from doing anything. I read Anansi Boys in like 2 days. I was restless. Dang, man.

Ah, but getting back to DotL and all of you is like letting out a breathful of air I didn't even realize I was holding in my lungs. What sweet relief. This is familiar. This is right. Mmm. Let's get back to it.

Sorry the page is late - there was a bit of a bumpy landing, and I'm still trying to get back into the swing of things. This is, again, the last page of a buffer I had built up for wedding and honeymoon plans, so I'll be getting back to work this week. There's no rest for the wicked, to be sure!

So, I don't know if anyone else has noticed, but Yoko and I certainly did - but Yoko's been doing a really fantastic job of adding diversity to all of the background characters. It's really added to my mentality when doodling up people to populate the background, as well - the "NPCs" are more varied and interesting, and it's exciting to see what colors Yoko decides to assign to them.

But this latest scene - on the page before last, specifically - was the first time Yoko had to use reference to fill in the colors for some background characters, to remain consistent with the color schemes I had assigned to them back when I was coloring this comic by myself. And I realized something: these new arrivals all seem to be more or less carbon copies of each other.

It's an interesting thought, really, the idea of race in fantasy. The world has obviously become way more diverse since Yoko joined the DotL team, which makes things way more interesting and fascinating to ponder - not to mention how it challenges me into flexing my artist muscles a bit, and expand my thinking into areas I wouldn't have otherwise gone on my own. It's pretty great. But as far as this fantasy world goes - and fantasy in general - what are your thoughts on that? Does it even matter? Characters are characters, right?

Perhaps it's more than coincidence that Neil Gaiman was alluded to earlier in this post, because he has some interesting thoughts on how to approach it in his own work - which is to say, not to mention it at all. The mental image the reader creates of the main character is, in some way, a reflection of the reader themselves, so they tend to project their own perceptions onto the protagonist.

Perhaps the same theory was at work when I was originally designing those background characters that have re-appeared in Thistle's unfortunate life, but how much has that already changed?

Gosh, I'm sorry to get all philosophical on you there. That's just where my brain has been the past two weeks, as far as the comic is concerned. I've been eager to hear your thoughts on it, too.