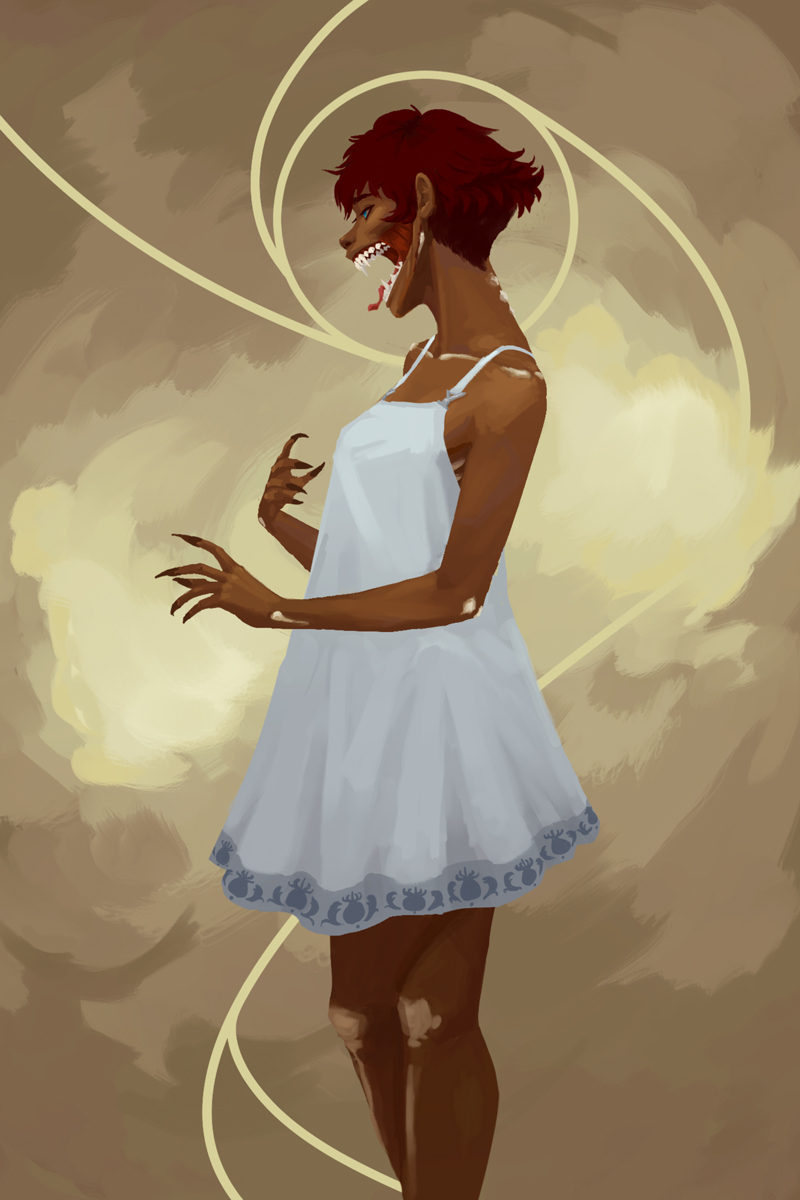 "There once was a girl who lost everything. Not all at once, but over long, taxing years, a kind of loss that came for her slowly in bits and pieces. The girl could think to herself it’s not so bad, not really, until the day she looked around and saw she had nothing left.
The girl was young and lost, and the will to live had been sucked from her. She wanted escape, and, at her lowest point, she made contact with a broken, miserable, and infinitely cunning creature known as a Drath. She offered herself as a host to the formless ghost-creature, and as it possessed her, she welcomed death, or oblivion, or whatever it was that came next.
However, the presence of the creature was cold, fathomless torture, like time had come apart and all the awful bits and pieces of her past were free to return and assault her again. The girl’s body began to break apart, and the Drath prepared to take full control.
There was an interruption. The Drath was banished, and the girl was carried to safety.
Her rescuer was St. Gwendolyn, a traveling magician with holy duties. Over the next year, Gwendolyn would care for the injured girl, and though the disfigurement of the Drath could not be totally undone, she would eventual return to full health. The two became close, and the girl soon saw Gwendolyn as a kind of older sister.
When she was able to walk again, the girl wanted more than anything to help St. Gwendolyn on her missions and quests. Gwendolyn, however, always refused. She felt enormous guilt for the girl’s new, monstrous appearance, for not arriving soon enough, and the thought of the girl coming to further harm was unacceptable. However, she did consent to teach the girl what she knew. That brief connection with a Drath, an Elder Being, gave the girl an innate knowledge of the workings of magic, and she learned quickly and ferociously. Gwendolyn was proud.
But the years wore down on St. Gwendolyn. Her work was punishing, and the few she could save never outnumbered the ones she saw die. Eventually, she could no longer see the girl as a sister, but as a constant reminder of her failures, and what had once been a loving relationship turned unhappy and abusive. Over time, their unhappy years together outnumbered the happy ones. The girl grew to hate herself for her appearance, and for having been saved. The girl knew she should leave, but she couldn’t, and she hated herself for that as well.
One day, Gwendolyn died. It was a heroic death, one fitting for a Saint. And the girl was alone once more.
But the girl was a woman now, lost and hurt but also older and wiser and stronger. This time, she held on to whatever scraps of hope she still had, and resolved to follow in the footsteps of the woman St. Gwendolyn had been when they first met, all those years ago."

HHGGGGNNNNNN GUYS, I KNOW I SAID THIS VERY BRIEFLY ALREADY IN THE LAST UPDATE but like come on, everything Oddsbod does just sends me to pieces. Look at this incredible rendering here - what a good design! What lovely colors! What impactful additional design elements!!! Why didn't I give Thistle a bigger, toothier mouth than she already has??? And those KNEEEEES. LOOK AT THE KNEES.

Oddsbod has a Tumblr and a Twitter, both of which you should follow because as mentioned already, they are incredibly prolific and their work is such a treat to the eye.

Oddsbod gave us one more piece of artwork of this theory that just kills me every time I look at it, so I'll be updating the site with that on Tuesday. Prepare to die, it will kill you.