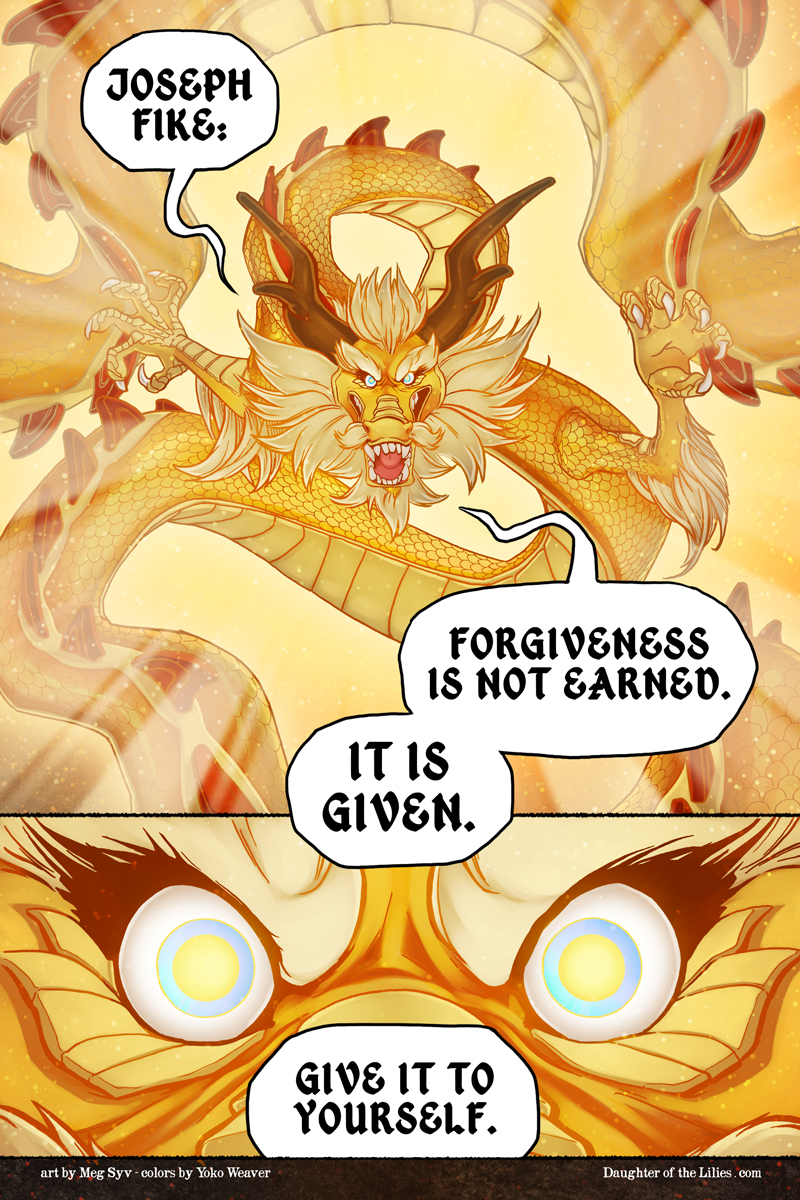 Hey, so, I know there are still a lot of people who are concerned just how overt the religious themes of this comic will be, so here is what you can expect with this one:

This is it. This will be as preachy as the comic will ever get. I'll expand on some of the ideas in blog posts, and there will be conversations happening in the comments, but you don't have to read those if you don't want to. I stand by the principle that I cannot dictate what you should take away from the story. You should be able to interpret it any way you want to. These more overt discussions and themes will also be somewhat few and far between until we reach the climax of the story, so you don't have to worry about there being a "moral" with each arc (that's boring).

So here we go! Let's talk about the idea of Forgiveness within the context of Christianity. (You are not obligated to read any further if you don't want to):

It's a pretty offensive concept. The idea that anyone is worthy of forgiveness is a difficult one to accept, especially for the people who need it the most, and when you consider the perspective of the people who have been most hurt by others. It's something whose significance I only appreciated as I got older, with every mistake I kept making, and as I learned more about the awful things in the world.

What is Grace? From Wikipedia: Grace is "the love and mercy given to us by God because God wants us to have it, not necessarily because of anything we have done to earn it." (Source)

What does this mean? Grace, and by extension, Forgiveness, is not earned. Nothing anyone can do will make them worthy of it. Instead, it is offered, out of no other reason than love for the person it is offered to.

What would this mean to you? Have you ever made a mistake? Have other people been hurt by that mistake? By your definition, what is the level of severity of that mistake? What would it mean to you if that weight could be taken away from you?

"That's a nice idea," you think to yourself, "but she doesn't know about the consequences of what I did."
Remember the definition of Grace? Remember how I said it was an offensive concept? Why does my opinion about your situation matter?

Forgiveness is a concept that is two-fold: the people you hurt can forgive you, but that means little if you cannot give it to yourself also. (For Christians, there is a Third Party, Whose Name I need not mention.) It should be noted that you can never force Forgiveness from someone. It is given in an individual's own time, and only when (or if) they are ready to do so.

I know there are still a lot of readers who disagree with Christianity specifically on the concept of "God," but I've always been of the opinion that there was always some sort of practicality to take from the Bible even if you're not a religious person. What would it mean to you if you could receive Forgiveness for whatever mistake you still beat yourself up for? How would you live your life differently?

For those of you who, like me, believe in God, what significance is there in asking Him for Forgiveness? Why should we ask it of Him to begin with?